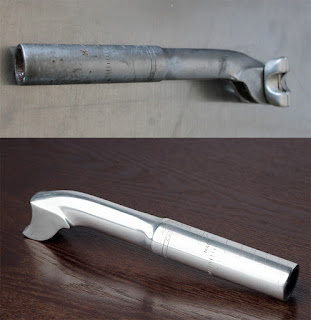 Go from the part above, to the part pictured below it, in about 30 minutes, no power tools necessary. I looked all over the web for more information about hand polishing aluminum parts, in this case, for a bicycle. I actually had a surprisingly hard time trying to find a good step by step. It probably has something to do with this instant gratification society. I want to know (in this order), What Will The End Result Look Like?, What Will I Need?, How Long Will This Take?, and then if I decide it's worth it, The Steps....with LOTS OF PICTURES! So for those with this impatient affliction, see above image. Worth it? Read on.
What You Will Need 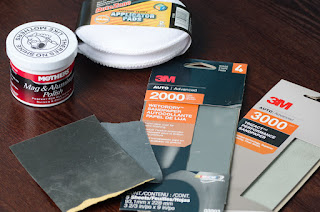 - Varying Grits of Sandpaper (Depending on the condition of your original part, how much initial sanding is required.) I started with 400, 600, 2000, and 3000.
- Mother's Mag & Aluminum Polish.
- Terry Cloth or Terry Application Pads
- Some paper towels and some water. I used a small bucket to sand over (wet sanding so there will be drips).

You can get all of these items at most automotive places like Pep Boys, or Autozone. I don't think the home improvement stores really carry sandpaper over 1000 grit or so (but they might?).

How Long Will This Take?

This is completely dependent on the size of the part you intend on polishing. A bicycle seat post took me about 30 minutes. You do not need any power tools, just the items listed above. 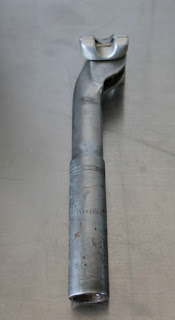 So this all started when I picked up a Campagnolo seat post for a great price relative to what they typically sell for. The part was, however, in pretty rough shape. If only it could be revived...

*For those saying to themselves, "That before picture looks terrible, like one of those get in shape quick info-mercials, of course the after looks so much better..." In my defense, I forgot to take a before, and had already begun sanding the post. SO, I used the eBay seller's picture. This is why they look very different.

The condition of your part will determine the grit of sandpaper at which you should begin. Obviously you need to assess whether the part can afford to lose some material (through sanding) relative to the kinds of issues affecting it's finish. Deep scratches would require you to sand the whole part to the depth of the scratch to make it disappear entirely. Since many tolerances on bike parts are fractions of a millimeter, you likely can't afford to sand out really deep scratches but scratches add character right? 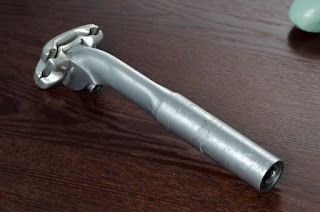 I started with 400 grit. You will be wet sanding (soaking the sandpaper in some water and sanding with the paper wet). I did this over a small bucket. You'll need to put some elbow grease into it. You want to sand as many of the scratches out of the metal as you can whilst being cognizant not too take too much material off. Beginning with 400 grit, you shouldn't worry, but starting with a more coarse, dry sandpaper, you can really get into the material quickly. 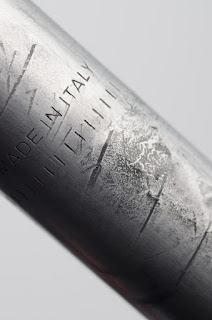 The sandpaper will leave a grey residue. You can use this to your advantage to see the scratches you want to sand through. See in the image above, the seat post was improperly, or rather violently removed from the bike leaving scathing lacerations in the lower part. These were too deep to sand through in my opinion.

STEP 2.  Once happy with the results of the first sanding, step to a finer grade sandpaper and thoroughly sand the part again. Some sites recommend sanding in a single direction and then sanding in the opposite direction with the next grade of sandpaper. I did some of this, but I didn't find it to be imperative to the success of the polishing. Just be sure to sand through what you had done with the previous grade of sandpaper. 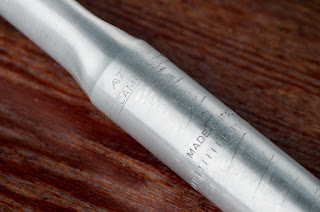 STEP 3. At this point, the part should take on a smooth, semi-gloss sheen. Now you're ready to apply the Mother's. This stuff is magic! 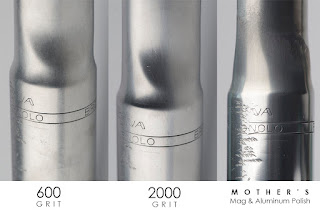 Above you can see how my part looked as I progressed through the sandings. In the third image, the top part of the post is sanded to 3000 grit. The bottom has the mothers applied. Amazing! As per the directions, I just dabbed a very little bit on the Terry pad, and began scrubbing intently, until the material literally dried up and began to appear glossy and brilliant! 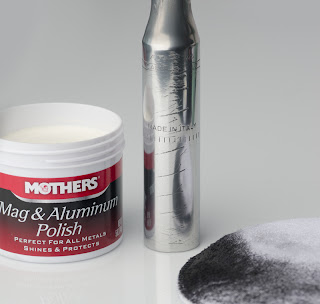 The seat post now has a beautiful mirror shine. As you can see, I did not sand down far enough to take the deepest scratches in the post out, because that might have caused issues with the seat post fitting securely in the seat tube of the bike. 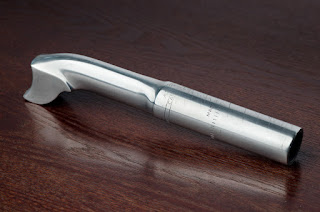 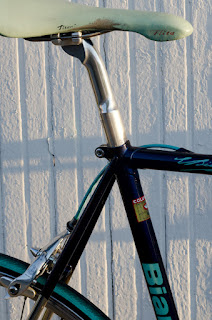 And mounted on the bike. Much nicer than before!

I picked up two stems at the LBS and applied the above polishing technique to just one of them. Initially, they both appeared identical, save for their size. Because these looked rougher than the seat post did, I started with 220 grit sandpaper. A more thorough sanding job would have yielded a nicer result but I was in the middle of conversing with the neighbor and an early afternoon beer! 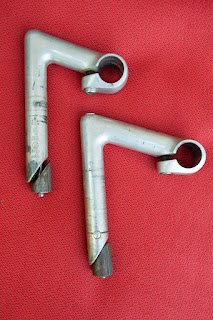 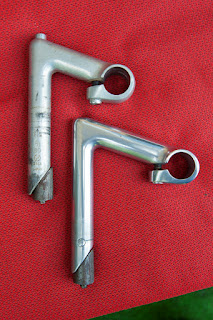 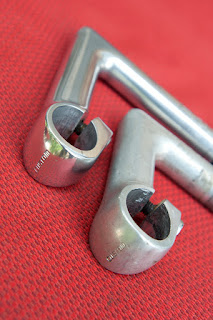 Installed on the ol Bianchi (The previous stem was a bit too long). P.S., this bike still rides like a dream!