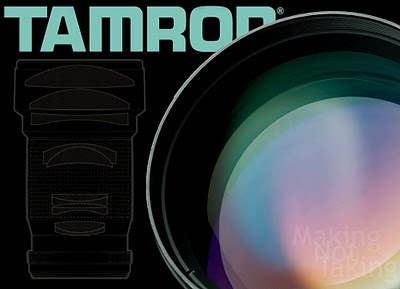 180mm prime lenses are somewhat of a lesser sought after focal length in this new era of digital. I presume this is because 180mm often falls within the range of more popular zooms. As far as I can tell, Nikon is still producing their AF 180mm f/2.8D ED-IF. The most recent iteration of which began production in 2006 (see Nikon Lens Serial Guide). So although the focal length has not been abandoned, users are a smaller segment. I find I often go to my Nikon AF 80-200mm f/2.8D simply because it's so convenient. Reviews indicate the Nikon 180mm is superior to the zoom though I have not personally ever used the 180mm.

Nevertheless, 180mm lenses are very popular amongst the manual focus enthusiasts. More discussion on the various 180mm primes of the past can be found on the Manual Focus Lenses Forum. 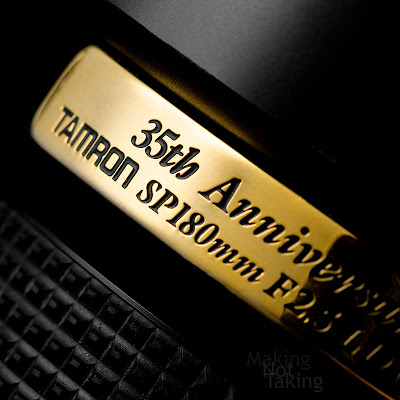 The Tamron SP 180mm f/2.5 LD-IF is pretty well sought after 180mm lens. Released in 1988 as a special edition lens, it marked the 35th anniversary of the Tamron company. It is an adaptall-2 lens and thus can be used on a wide variety of cameras. The LD suffix signifies that the lens utilizes low-dispersion glass providing optimal apochromatic performance. IF means the lens is an internal focus; It does not physically extend when focused. The small blurb on Adaptall-2's site states the 180mm uses a "spherical aberration compensator group" to improve performance even close-up. Put simply, this lens was stacked with Tamron's best offerings for that time and was meant for use by serious photographers.

Along with premier specs, another factor could be involved in the intrigue of this lens; Only 3000 were ever made. Everything I have read about the Tamron SP 180mm f/2.5 LD-IF has been very positive, and the debate between whether it is "better" than the Nikon 180mm is ongoing (this argument of course, can become quite subjective). 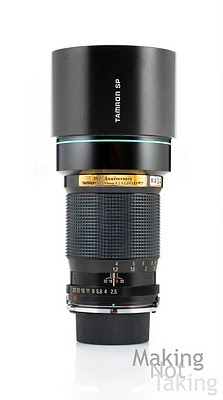 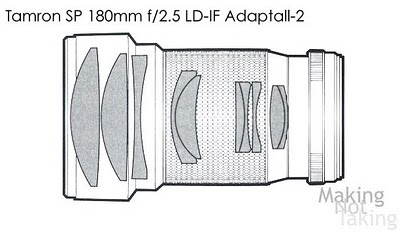 Like the Tamron SP 300mm f/2.8 and 400mm f/4, this lens boasts adurable, pro-quality build. An all-metal construction has ensured the relatively small number of units produced, remain intact for many years to come. I have said this before and I will say it again, I still think the adaptall concept is an excellent, practical approach to third-party lenses. Though some may criticize Tamron's execution of the idea, I find those shortcomings easily overlooked by the sheer utility these lenses provide. 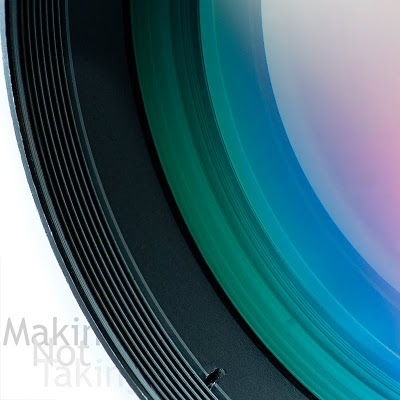 The benefit of a prime 180mm is a more compact lens than a comparably fast zoom that covers a similar focal length. Although this lens may be more a bit more compact, it is still a heavy lens! It originally was marketed with a large bayonet hood and will accept the Tamron 01F 2x and 140F 1.4x teleconverters. I also received a Tamron brown leather bag that may have originally been marketed with this lens. 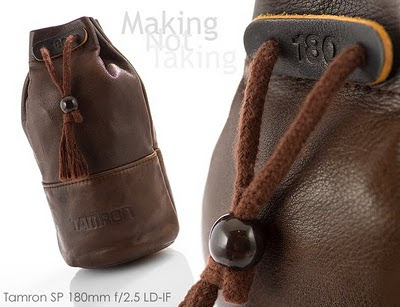 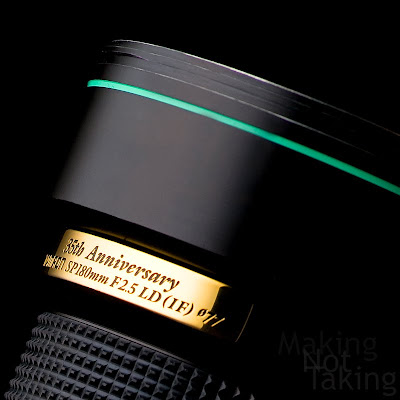 I have much more shooting to do with this lens before I officially pass judgment. My initial results indicated the lens performs well wide open regarding sharpness and has minor CA. Wide open it is a bit soft, but is very sharp by f/5.6. Below are just a couple test shots I made. 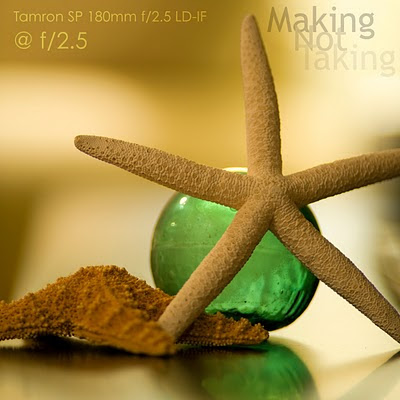 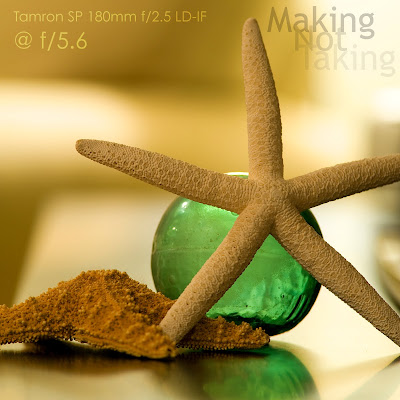 And here are a couple closer crops of near the center at the above apertures: 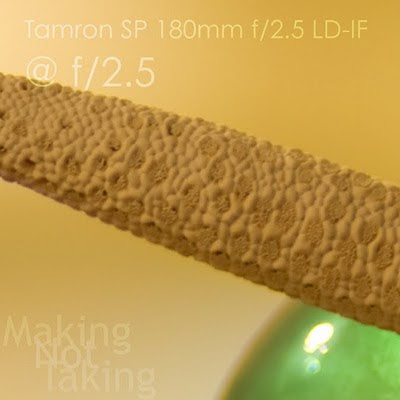 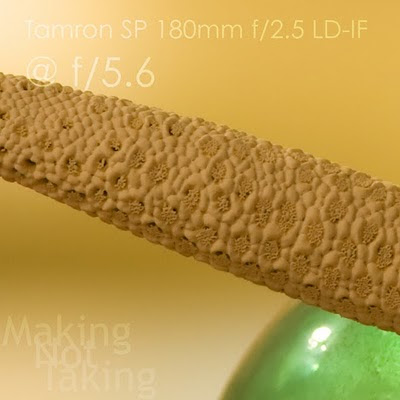 This was a quick test done with a tripod and using ambient light. Though it was not a thorough or elaborate test, it does prove a good first demo to preview performance.

I love the image quality that comes out of this SP glass. So far I can see some minor CA is evident in the early apertures, f/2.5 and f/4 (not very visible in a test like this). But even the CA I have seen so far is really negligible. At f/2.5, I am confident to say this lens is a bit soft. It is however, a softness beautifully applicable to ethereal environmental portraits. Though my experience with this lens is limited at this point, I can really forsee some wonderful portraits being made at f/2.5. Contrast of this lens looks great! The coatings and ED elements really bump this lens into the Pro realm in terms of contrast. I have not photographed with this lens outside to a wide extent yet, and did not get a hood with my copy so just how well this lens handles flare is still a toss up. I suspect I will at least need a good substitute for the hood (Finding the original #73FH is probably going to take a lot of patience!) because the large, prominent front element is bound to have some issues with stray light.

One thing I am sure of, the Tamron SP 180mm f/2.5 LD-IF 63B promises to be a reliable, well-built, beautiful piece of optical equipment reminiscent of a beautiful era of photography. Like it's sibling SP Adaptall-2 pro lenses, the 180mm possesses well-engineered optics within a precision-made robust exterior. I love just holding lens in my hand.

A quick search on this lens brought up a thread on Photo.net in which user, Roland Larson posted the pages below. The first page is from the UK publication camera weekly and the second image is from Modern Photography. 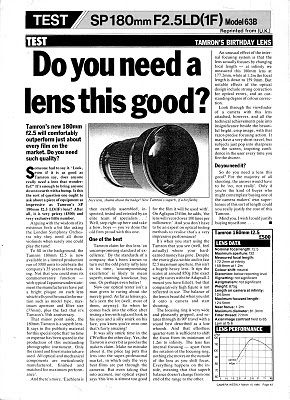 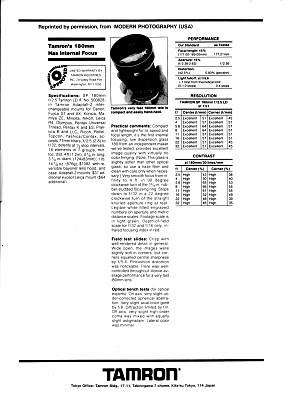 Many of my initial thoughts on the capabilities of this lens are assured in these two articles. I am surprised to read the Tamron actually sold for a higher price than the Nikon in its day. Since I have not used the Nikon, I would be interested to do a side-by-side.