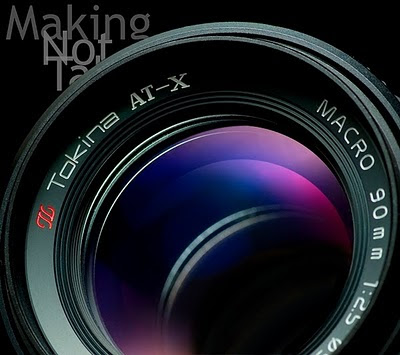 More than a decade after Vivitar's release of the Series 1 90mm f/2.5, Tokina unveiled their AT-X line's macro lens (1986). According to a review written by user Tao.design on dpreview.com, Tokina denies any relation between the Vivitar S1 90mm and their AT-X 90mm. That review, by the way, is a great in-depth look at this spectacular lens. As is the case with these more popular lenses, due to a good amount of info already available, this post will attempt to serve as a hub of as much info as I can gather, my personal experience with this lens, and some detailed images! 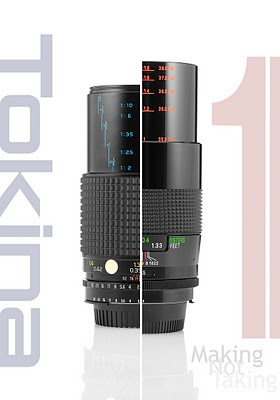 Above, the Tokina 90mm and the Vivitar 90mm side-by-side. The size difference is only cosmetic as the Vivitar has a slightly longer barrel and thus more shaded front element.
So despite Tokina's reluctance to reveal their 90mm's true origins, it is accepted these two lenses share their optical formula. It was, after all, Tokina who manufactured the original Vivitar Series 1 90mm. Speculation that Tokina either purchased Vivitar's design (perhaps near or after their demise) or adapted it to their own, abounds. As far as records, dates, and other empirical data proving any of these allegations is sparse at best. Whatever the truth may be, it doesn't change the fact that the Tokina 90mm f/2.5 AT-X macro is one of the best macro lenses ever made. 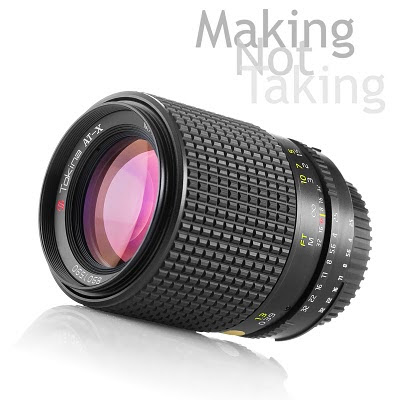 The AT-X 90mm f/2.5 is slightly smaller than the Vivitar Series 1 90mm and in a way feels as if everything in the S1 has merely been packed into a slightly smaller package. It is a dense hunk of metal and glass. The AT-X is also slightly shorter as the front element is not quite as recessed as the S1.

The ridged rubber grip pattern used in the AT-X line is the same as I found on the Tokina MF 300mm f/2.8. It's rigid and perfect for grabbing quick focus. This 90mm also has macro reproduction ratio markings on the barrel, same as the Vivitar. 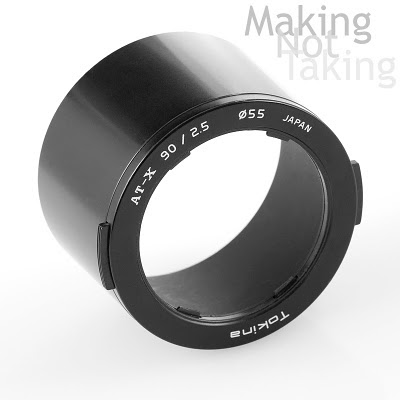 One thing I appreciate about the Tokina 90mm is the small ridge near the top cut specially to accept a dedicated clip-on lens hood. These 90mm lenses definitely need it. The hood does not interfere with the front thread so you can keep a filter on the lens, the lens cap, or even flip the hood backwards for stowing in any order you want. Simple.

Just like it's Vivitar cousin, the Tokina 90mm was designed for a 1:2 macro reproduction ratio but originally came with a 3-element macro extender the brought the lens to 1:1 while correcting for aberrations. The Tokina extender lacks a rotating tripod socket like the Vivitar S1. It also does feel considerably lighter and bit less rugged. Also, it should be noted, I used the Tokina extender with the Vivitar 90mm with great results however, the Vivitar extender cannot be used with the Tokina 90mm due to a fitted metal ridge at the top of the extender (at least in terms of the Nikon AI mount lenses).

This lens originally came in a 2-part black leather cylindrical case which included a smaller, leather compartment specially crafted for the extender. The interior was a red felt. Prices on eBay as of May 2010 have been between $360-500+ USD for these sets. They truly are worth it as they are capable of phenomenal images and sharpness. 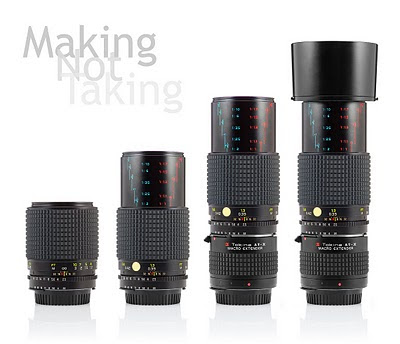 Specs and MTF data can be found at Photodo.com. This lens is ranked their 4th sharpest lens ever tested. 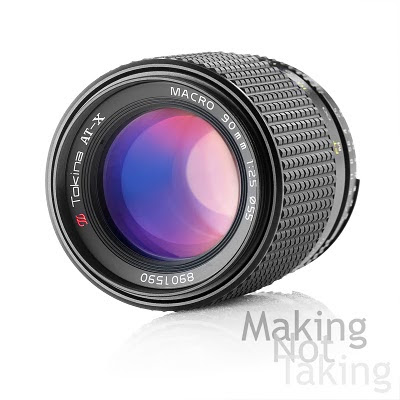 How does the Tokina 90mm fair? I think it's safe to say by this point, you know, this lens is incredible. I really cannot say more. This lens is sharp wide open. And not consolation-sharp, tack sharp. I consistently use this lens wide open. The bokeh is just as a lens nicknamed "The Bokina" should be: beautifully soft, smooth, and aesthetic. The coatings provide great optical performance and contrast. I love the color I get from this lens. Of course there is a hint of CA wide open, ever so slightly in extreme highlights. But I honestly have no cons with this lens. If you have the chance at one, buy it. You cannot beat the performance for the prices of some of these (I say some since due to the hype, the prices have been on the rise. $550 can buy modern macros with AF and newest technology coatings).

Below is the full-frame image and then a crop at about 200% of a jumping spider made with the Tokina 90mm f/2.5 wide open. I was holding the little guy just above the grass on a bright day. ISO 200 on the D700. 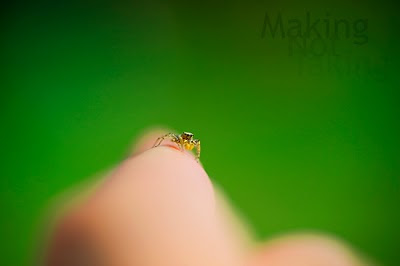 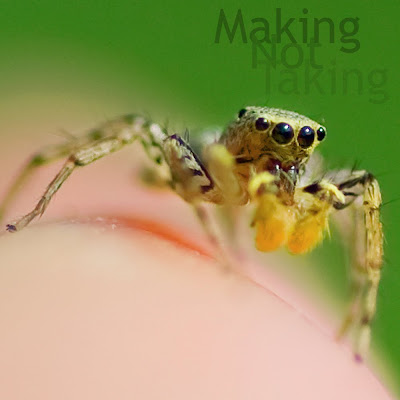 If they truly are the same optical design, then is there much difference in performance? If so, which one is better/should I look to buy?

Tokina 90mm AT-X
Vivitar S1 90mm
Ultimately, I would recommend the Tokina 90mm AT-X. I prefer the ability to shoot under strobe over the cosmetic amenities of the Vivitar. Purchasing a lens is essentially purchasing a tool. The Tokina offers the more capability. Also like tools, more capability typically costs more money. The Tokina 90mm often goes for a much higher price than the Vivitar 90mm. Keep in mind though, both lenses perform extremely well relative to other macros and are very sharp wide open.

eBay member, Malak, was kind enough to acquiesce to my request for images of packaging as he listed a beautiful sample on eBay. I love cut-away images. Also, if interested, the auction ends June 21, 2010 and can be found here. It's for a rare Pentax KA mount. You won't see these very often, and especially not in this type of shape. 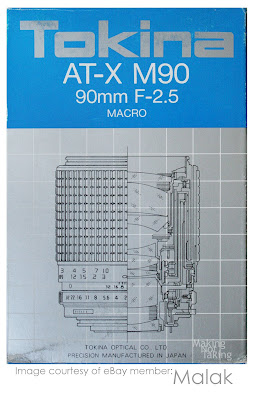 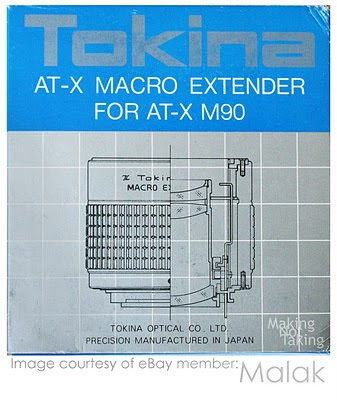 Nesster has a cool upload of an original Tokina Ad featuring the AT-X line which included the 90mm. 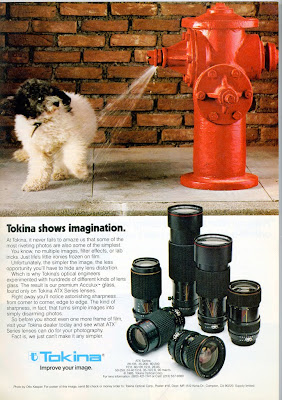 Dpreview.com's write-up of the Tokina 90mm

Some very beautiful images posted in a Chinese forum made with the Tokina 90mm.

Another Chinese forum with samples.

Short post with images of the lens and some examples from a Japanese site.

Good examples of bokeh produced by this lens in a Russian blog.
Made by David at 12:43 AM