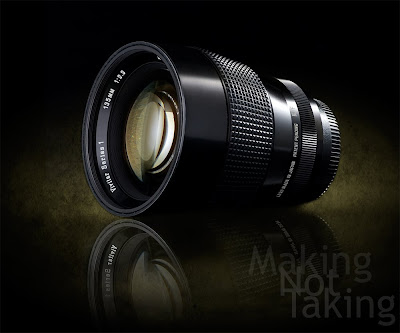 1975 witnessed the introduction of the Vivitar Series 1 line. These new lenses boasted specs unheard of at that time from a "third-party" manufacturer. Not only did they perform admirably, but they looked good doing it. Looking back, over the lenses produced throughout that era, I personally find the Series 1 lenses to be of more interest than any other lenses. In fact, it was through the Vivitar 90mm (Komine-made) and Series 1 90mm confusion I first began this blog and have become increasingly obsessed ever since! They represent, for me, perhaps one of manufacturing's greatest examples of a perfect synthesis between "form and function".

I love prime lenses. With the convenience of zooms, primes are a thing of the past. Everything's a zoom now. Older photographers once upon a time, memorized the field of view that a particular focal length gave them. They anticipated more, shot many cameras at once, and the task of shooting the multiple focal lengths needed throughout the duration of an event was exhausting. Zooms have really changed all that. Zoom lenses, were inevitable.

While the zoom market has expanded exponentially due to increased technological capabilities in design and manufacturing, those are merely variables in a much larger equation. Money is the crux. Money always drives technology either directly or indirectly. In this case, money is flowing from the professionals and consumers. The pros want quicker/more efficient equipment for greater output and in turn larger profits. Consumers love convenience. A zoom is just that. Forget time consuming lens swaps and larger bags with x number of focal lengths in them. With the zoom, people could be shooting a telephoto image of the end of the pier one second, and with the flick of their wrist, be snapping a close-up of a flower, the next. Pros could be grabbing hundreds of shots without the hassle of swapping lenses or lots of cameras dangling from their necks, as well as easy in camera cropping (saving valuable time from the post editing process). In the beginning, zooms afforded convenience but still often suffered optical issues due to the complexity of attempting to do what primes often could not do perfectly, over a range of coal lengths. That too is changing. Yes, the zoom was an inevitable evolution of fixed focal length lenses.

To be clear, I don't hate zooms. They are not "evil". I don't think they are directly of any cause the deterioration of photography. No, it is more that as well as being an incredibly versatile tool, they can become a crutch. It's very much like auto-focus and metering to me. People would come into the store telling me a camera didn't take good pictures. After looking at their attempts, it really was just that the camera was not well equipped with a precise light meter. Or the conditions under which they wanted images was far more demanding than any digital sensor could handle. The point being, these people had no idea what was even happening in the photographic process.

A prime, to me, represents a definitive decision. I chose this lens, for this purpose, period. 135mm, portraits. 20mm, landscape. Same issue as shooting specific glass - zeiss, nikkor, L, etc. We consciously make these decisions defining our variables in our creative process; we choose specifics to articulate - to make images.

Primes also hold a nostalgic value to me. Like manual focus, and massive 4x5 cameras, and glass plates, they represent just a piece of that once laborious effort between mind and equipment that befell photographers attempting to create; trying to freeze a moment, or create something beautiful. They are from an era, where imagery was much more highly valued I believe. 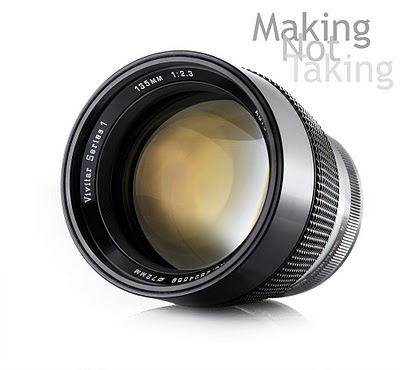 I cannot recall where I first saw the Vivitar Series 1 135mm lens, but I was immediately enamored. What first caught my eye, was the fast f/2.3 aperture for a 135mm lens. The second thing was obviously the similar look to the Series 1 90mm (my favorite lens of all!). I couldn't find a whole lot about it, nor many images over which I could salivate. I also found, based on the few images I did see, the conical shape and physical movement of the lens a bit of a mystery. Every other lens I had seen was cylindrical. When lenses zoom, a smaller cylinder protrudes further from the larger within which it is housed. This 135mm however, appeared conical, from which a smaller cone-shaped tube emerged. Strange! So here it is: 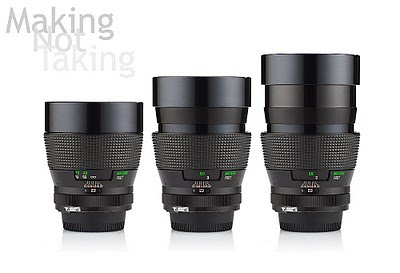 *Komine actually manufactured this lens. I have seen 1 or 2 unconfirmed rumors of a possible Tokina-made Series 1 135mm f/2.3 but I have never personally run across the evidence of this. 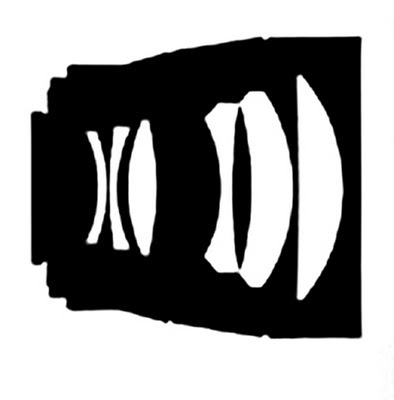 As I stated before, this lens has a very unique shape looks a bit strange when cranked all the way out for the closest focusing. It is identical (but smaller) to the 200mm f/3.0. Which is next on my hit list. The 135mm is somewhat a short, rotund little fella. The sample I picked up has been AI modified from an older non-AI version so the finish and metal has been a little chewed up at the base. I have seen a few on eBay with the appropriate manufacturers AI mount. These "newer" versions also appear to have the blue "VMC" lettering on the front ring indicating Vivitar multicoating. The version I have does not have this and I am led to believe, it is not multicoated. Every forum I have read about the lens raves about, as with most of the early Series 1 lenses, the ultra-smooth focusing. It really is "like buttah".

The lens weighs a full pound and a half. It's a solid chunk of glass and metal. Again, same precision carved barrel with a small ovular window cut right out of the barrel to view the markings engraved into the inner barrel denoting aperture, as well as a rectangular window for the focusing scale. The built-in hood appears to provide a little protection against flare, but I haven't had it out long enough to experience the limitations. I am a bit hesitant to believe it provides the maximum protection for this longer focal length given how short it is. 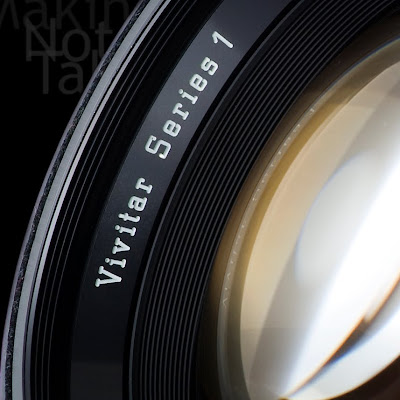 One of my favorite attributes of this lens is the massive, spherical element bulging out of the lens barrel. This thing is awesome. The coating has an amber tint to it, while the lens doesn't appear to any discoloration (as is common with older series 1 lenses. they sometimes yellow a bit). It takes a just a little under a full rotation (maybe 9/10 of a turn) to go through the full focus of the lens.

After owning a couple of these 135mms, I have noticed it appears Vivitar released two versions of this lens. The first, being the lens first pictured here in this post. In the second version, Vivitar multi-coated the lens, giving it the "VMC" denotation and you can typically discern the VMC coating right off the bat. I haven't owned both versions simultaneously and thus have never done a side-by-side. Through my experience with the 90mm macro and the 90-180mm macro zoom, which are both VMC, I can say the contrast with these lenses is excellent. 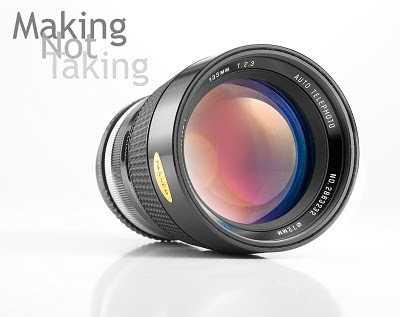 The girl and I went out to dinner this evening, but not before I snapped some shots of her coordinating with her friends from out-of-town. I tweaked the contrast/color for the web and sharpened only so the web-softened image was back to what the original file looked like. This shot was taken wide-open (f/2.3) at ISO 200, with the D700. Below is a crop, I believe around 200% blown up a bit, to see the sharpness this lens can produce wide open even. I am actually pleasantly surprised! I will say, though less prominent in this shot, the series 1 135mm suffers some CA, at times to a rather severe degree (see example 2). 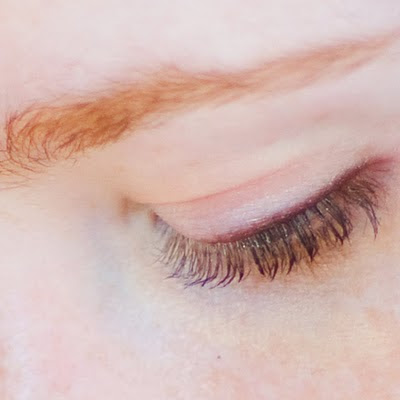 OK, I know, worst composition ever. Does this guy even know how to make a photo? I was relaxing in the comfy living room chair, this happened to be across from me! Fairly severe circumstances in terms of lighting, but gives you an idea of how much CA this lens can have. Give me a day or two and I will get some better images up. I did make a quick shot at infinity wide open of some trees and all the branches were blue... 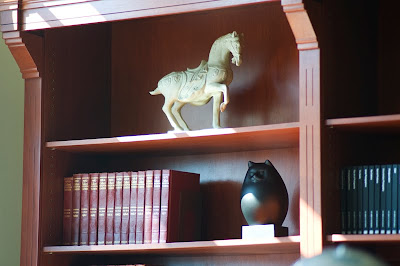 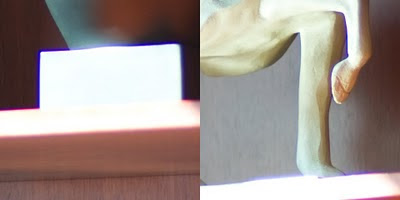 Despite these flaws, I would say this lens definitely has a place in my bag, as well as my heart. I have a tough time separating design and performance. Sometimes, I have no trouble making excuses for an under performing optic if the design aesthetic is impressive enough. So long as I am honest about the optical performance right!? I need some more time and variation in subject matter to make an accurate judgement. At this point, I do believe the lens can produce some very nice images. I would say, on this one, there are definitely sharper, faster options out there with better controlled CA. Picking up this lens is more about the aesthetic of shooting with a 30 year old piece of glass and achieving a specific air about the images made. (in other words - not like the S1 90mm f/2.5 in the macro realm, which can still match and exceed some of the newest macros)

AI Modification
Upon request, here is an image of the AI modded sample I used. I also threw in one with a turquoise highlight if it helps to discern where the mount has been milled. I did not perform this modification, I picked up the lens like this. Though it looks like a fairly beat-up sample, everything seemed to work as it should. I have now owned three of these on different occasions. I can't stop picking them up when I find them, just still searching for that mint copy! 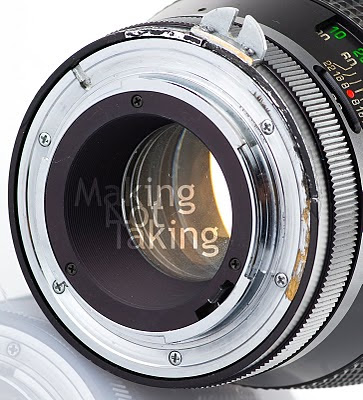 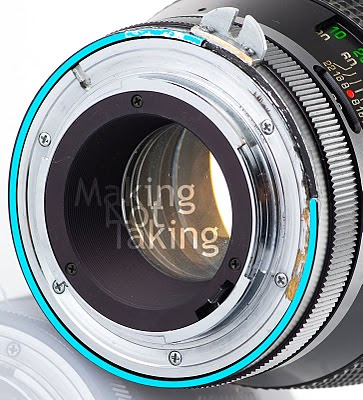 Hopefully one of the images helps you Theofanis!

Below is another advertisement scanned in by Nesster and posted on flickr. The two ads below were posted on the forums at fredmiranda.com (link is below as well) and actually accompanied by the ad above independently scanned by someone else. 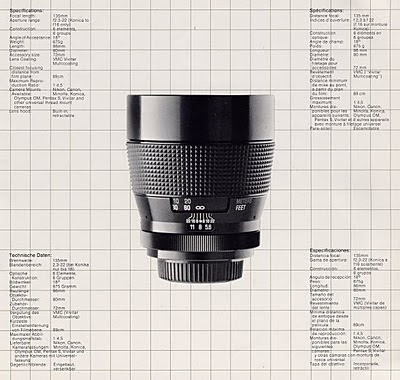 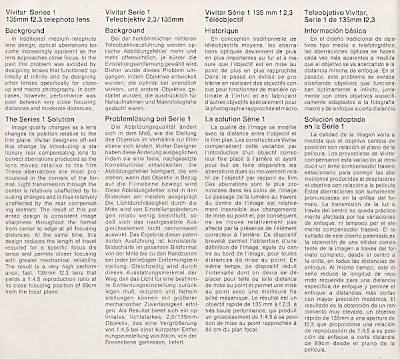 Talk of this lens as well as old ads posted here:
http://www.fredmiranda.com/forum/topic/710405/0

Some praise for this lens on the photo.net forums:
http://photo.net/filters-bags-tripods-accessories-forum/00Ga7G
Made by David at 12:50 AM