6 Months with the Panasonic GF1 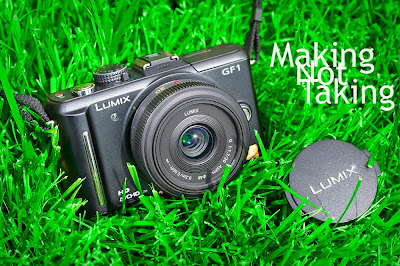 It has been 6 months since I first got the Panasonic GF1; Panasonic's most compact endeavor into the EVIL (Electronic Viewfinder Interchangeable Lens) cameras to date. The GF1 boasts a small, portable body, interchangeable lenses, a hot shoe for external flash or electronic viewfinder, and a full Four-Thirds sized sensor. Designed to fill a niche between the most capable point-and-shoots and entry-level DSLRs, these Micro Four-Thirds cameras represent a brand new market within the digital photographic industry. Olympus has already release two more models (EP-2 and EP-L) of their M4/3 line since their initial release of the EP-1 back in july 2009. Just a month ago (May 2010) Sony announced their foray into the EVIL cameras with their NEX-3.With all this money and effort being funneled into the EVIL cameras, photographers and enthusiasts are left wondering just how good these little cameras actually are.

After some time with the GF1, I have formed a much clearer perspective on specifically the GF1, but also some general pros and cons to the M4/3 world.

What Do You Think of the GF1?

This doesn't happen often, but my initial impressions of the M4/3 and specifically the GF1 were pretty accurate. One factor I have found, which will greatly impact how someone will receive the GF1 or another M4/3 camera is what the user currently has for equipment. I have been using prosumer cameras like the Nikon D200, D300, and D700 along some of their better optics and great macro lenses. Honestly, shooting anything after the D700 or full-frame (barring medium format digital) leaves more to be desired. I am also quite familiar with the Canon G9, G10, G11, and S90 which are a few of the better P&S on the market. It was actually the vast difference between the phenomenal ISO performance of the D700 and the comparatively poor ISO performance of the G10 (or any P&S with such a small sensor) that caused me to explore the Micro Four Thirds System as an alternative to lugging around a big DSLR all the time while still getting good low lighting images.

What I Love:
What I Wish Were Different/Better:
Wow, that gripe list looks awfully long; it's longer than the love list...

Ultimately the GF1 is just too expensive for what it is. In some ways I feel like it is being marketed more as a gadget than an image making tool. Sure, it is more than I ever got out of my already stupidly expensive P&S. I remember having the hardest time picking out a P&S because every time I finally got close to picking something that had the options I felt I needed in a camera, it was the most expensive (usually one of Canon's G cameras) at around $500. At which point, I felt, why don't I just get a small DSLR body with still better image quality? But now I have doubled that price and still am not quite getting DSLR quality images. Maybe I just want too much. This would all be different if the GF1 (with lens) cost around $600, and lenses at most cost $400. Ridiculous perhaps but somehow it makes sense in my fantasy world of photography.

Again, this could all be tainted by the fact that I regularly shoot a D700 which, as far as I'm concerned, is just a gorgeous camera. I can make some killer images with that beast, and print them to perfectly reasonable (and absurdly unreasonable) size, and need nothing more. And the fact remains, even when technology has moved on, my "old" D700 will still be able to enable me to make the same great images, printed to the same normal, or huge sizes, to my heart's desire. An 8x10 is an 8x10. And my 20x30's look just awesome. I'm not printing billboards...yet.

Did I mention I am bipolar? Practicality aside (not all but that which was mentioned above), I find the GF1 to be an excellent tool and it does possess some strong points. It represents a great first attempt at a new type of camera. I find benefits to it all the time! People act more natural around it since it is less intimidating than a DSLR. As photography becomes more persecuted where people are more wary of who is taking pictures and why (I see this a lot in retail stores. I come in with a camera just to browse and owners/managers always want to know why the camera and who I am taking pictures for. The small GF1 is unassuming and saves me that trouble 9 times out of 10. Without the loud mirror clack, I can make images in quiet venues (Though the GF1 isn't silent, the minimal shutter noise is far less disruptive). The GF1 is a great camera and a wonderful tool to have in the kit. It just costs more than it should and given the tighter financial status of beginning photographers, I wouldn't recommend this camera as a replacement for a DSLR. Though I will say, photojournalists may find something like this an excellent sidearm due to the importance of minimizing your presence and capturing a moment in as pure a form as you can.

As mentioned before, these small interchangeable lens cameras aren't going away. As of this post, Olympus and Panasonic are going the Micro Four-Thirds route. Sony is using APS-sized sensors in their NEX line. Samsung has released a brand new line starting with the NX10, which utilizes a brand new mount system and APS-sized sensor. It is rumored Nikon has something on the way too.

It is a new niche and technology will only get better. I still feel the same initial excitement over these smaller EVIL cameras, even despite the drawbacks of the GF1. A newer, better model will always be on the way. The beauty here, is that conceptually, these cameras have such potential. I don't know what it is about large gear that people find so upsetting, but it doesn't seem to be the images quality. Though, it would appear the line of thinking may be: bigger camera means more "professional" or detailed image to which the self-conscious flushes with reluctance and excuses. "Oh, stop I don't have make-up on." Side-note: I love that strange desperate yet seemingly erratic attempt to get out of the frame. Where the person ducks and bobs while awkwardly searches for the edge of the image as if it will be a physical frame which they can grab and dive out of.

For a comparison of sensor sizes, see this great chart from Wikipedia.com
Made by David at 5:51 PM